CISEA Organises a Day Conference on Islam and World Christianity 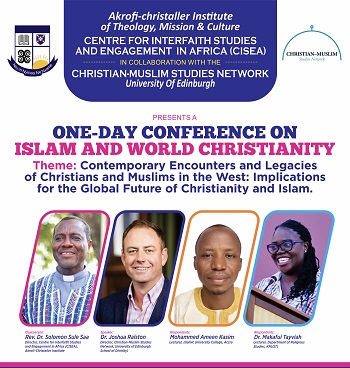 The Centre for Interfaith Studies and Engagement in Africa (CISEA) of the Akrofi-Christaller Institute is organising a One-Day Conference on Islam and World Christianity in collaboration with the Christian-Muslim Studies Network of the University of Edinburgh in the UK. The conference would be held at the J. H. Kwabena Nketsia Hall of the Institute of African Studies at the University of Ghana on the Monday, 2nd of March 2020 from 9:00am to 1:30pm. The theme for the conference is: Contemporary Encounters and Legacies of Christians and Muslims in the West:  Implications for the Global Future of Christianity and Islam.

The Christian population in Europe, is on a sharp decline. Nonetheless, ancient and contemporary Christian thoughts, be it expressed in political orientation or societal ethics, constantly challenges and are being challenged by contemporary socio-political events. In the wake of colossal movement of Muslim migrants into Europe in recent years, Christian leaders and Churches in Germany, for instance, played a significant role in influencing the people and government’s reception of these migrants. On the other hand, such European leaders as Viktor Orbán of Hungary with anti-migrant policies claim to do so in order to preserve the “Christian culture” of Europe.[1] Yet, among Christian theologians, the phenomenon raises the theological question of what it means to be hospitable and at the same time preserve the interest one’s faith and nation?

Similarly, the growing divisions and indifference among the Churches in the United States of America towards the policies of the contemporary political regime, generates global debate among Christians on what it means to be an evangelical Christian.

This legacy of strong mutual influence between Christianity and the Western society is an enduring one which may not have yet been paralleled by any particular religion but, undoubtedly, keenly contested by the experience of Islam in the regions.

It is estimated that in terms of percentage of the regional population, there are now more Muslims in Europe and North America than there were, few decades past.[2] The increasing presence of Muslims in Europe, partly due to migration and global politics, raises a lot of questions for the laws, ethics, politics, economy and social philosophy of the Western countries. On the flip side, the dominantly liberal nature of the Western society constantly challenges Muslims in these areas to re-think what it means to be a Muslim. The spill over effect in such a highly globalised world is that long held Islamic philosophical, theological and legal thoughts and practices are subjected to a more intensive scrutiny and in some instances sparking movements for radical departure from Islamic orthodoxy.

Manifestly present and keenly observing these ongoing religio-political developments in the West is a strong African Christians and Muslims as well as Diaspora Churches with deep roots and affiliation to mother Churches back home in Africa.

The question worth exploring is, what does this ongoing and most importantly, contemporary encounters between the Christian and Islamic religions and the Western society mean for the future of these two global religions, bearing in mind the strong influence of the West in shaping global agenda? This question is even more critical for practitioners and scholars of Christianity and Islam in Africa, the place now called “God’s new continent” for being the contemporarily most vibrant centre for religious activities. Is there a cause for worry or necessity for a certain action by African Christians and Muslims?

It is in the light of these developments that the CISEA has put together this conference. Dr. Joshua Ralston, a Reader in Christian-Muslim Relations and Comparative Political Theology at the University of Edinburgh Divinity School and also the Director for the Christian-Muslim Studies Network will deliver the keynote lecture. Dr. Makafui M. Tayviah (Lecturer at Religious Studies Department of the Kwame Nkrumah University of Science and Technology) and Mr. Mohammad Kasim Ameen (Lecturer at the Islamic University College) would respond to Dr. Ralston’s lecture from Christian and Muslim perspectives respectively. The Rev. Dr. Solomon Sule-Saa, Director of CISEA would chair the conference. There will be an information session on opportunities for further studies at the University of Edinburgh and the Akrofi-Christaller Institute.

The Conference is open to students, lecturers, religious leaders, researchers and the general public. Even though participation in the conference is free, it is important that interested participants register ahead since there is a limited space. Please click on the following link to register:

The CISEA commits to resourcing religious leaders, scholars and practitioners through research, publication, teaching, and public engagement conferences and seminars on issues related to interfaith relations as well as interactions between religion and society in Ghana and the broader African society.

We use cookies on our website. Some of them are essential for the operation of the site, while others help us to improve this site and the user experience (tracking cookies). You can decide for yourself whether you want to allow cookies or not. Please note that if you reject them, you may not be able to use all the functionalities of the site.